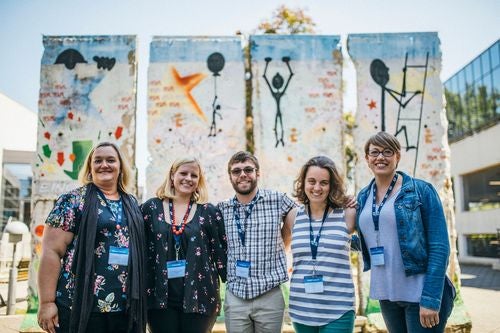 In an interview with Education Week, these educators shared stories from their trip and what they learned about vocational training in Germany, the challenges of German teachers, student-centered learning in German schools, and how Germany confronts its past. You can read more about some of their reflections below or in this Education Week’s Teaching Now blog.

Heidi Crumnie, 2018 New Hampshire Teacher of the Year
…On innovation and student-centered learning (adapted from an interview in Education Week’s Teaching Now blog)

According to Education Week, Heidi Crumrine was inspired by the value on student choice and voice.

"When kids are invested in what they're doing, and when they have ownership, they're much more successful—and happy," she said.

Though most American high schools aren't planning to do away with grades or a structured schedule anytime soon, Crumrine says she's seen more project-based learning integrated into standards at the state and district level. In her state of New Hampshire, a leader in competency-based education, students have the option to take a competency-based assessment instead of a standardized test in some grade levels.

Paul Howard, 2018 District of Columbia Teacher of the Year
...On vocational training and career preparation (adapted from an interview in Education Week’s Teaching Now blog)

“Their large-scale, public program is more comprehensive than any career and technical education options in the U.S., said Paul Howard, a social studies teacher at LaSalle-Backus Education Campus in Washington, D.C.

"Even at the college level in the U.S., we haven't figured out how to give people applicable knowledge," he said.

Howard was skeptical that the U.S. as a whole—a much larger, more decentralized education system than in Germany, with a more diverse student population—could effectively replicate the national vocational training model.

"To say that we can just take what we're doing and drop it into the United States, which has a completely different historical context and cultural context—it's not going to happen," he said.

Becky Mitchell, 2018 Idaho Teacher of the Year
…On teacher challenges (adapted from an interview in Education Week’s Teaching Now blog)

The German public school teachers that the state teachers of the year met with also discussed difficulties they experienced in the classroom. Teacher pay is also low compared to other professions, they said, and teacher retention is a problem in German schools. (Teacher pay in Germany is actually higher than in the United States—2016 research from the Organization for Economic Co-operation and Development found that a veteran high school teacher there makes about $89,000 annually, while the same analysis put the average salary for a seasoned U.S. teacher at $69,000.)

"We're subject to the same bureaucracy, the same red tape," said Mitchell. "And we all want what's best for our students."

Leah Juelke, 2018 North Dakota Teacher of the Year
…On similarities and differences between students in Germany and students she interacts with

“One major difference that I noticed between German and American students is that German students are more independent when it comes to performing in class tasks and real-life skills. Students are given much more autonomy in some German schools, which contributes to their academic and personal successes. Students navigate public transportation daily and have class projects which takes them out of the classroom for weeks on experiential learning quests.  German students can choose to finish high school at the age of 16 and continue on with a vocational track. Students who continue with high school then start a college tracked career for the next two years and then continue onto college. What would essentially be the courses American students take for the first two years of college, German students are taking in their last two years of high school. The German connection between schools and the workforce is strong, something that America is lacking.”

Michelle Cottrell-Williams, 2018 Virginia State Teacher of the Year
…On how the lessons she learned in Berlin will have an impact in her classroom

“I went to Berlin with the goal of understanding how the Germans study and remember their history without glorifying the oppressor. I'm from Virginia, and the one-year anniversary of the August 12 events in Charlottesville weighed heavily on my mind as I departed for Germany. I have talked with my own students about what it means to study and remember our history in balance with how we choose which parts of our history to glorify or lift up as worthy of remaining in our collective memory. We have spent time discussing the politics around monuments, street names, statues, flags, and other historical memorabilia dedicated to the Confederacy. In our conversations, we consider how we can study this piece of our nation’s history without ignoring or forgetting the sordid, dark details of our past. In Germany, the Holocaust is studied and remembered without glorifying the role of Hitler and the Nazis. There is no Hitler Avenue nor do Nazi flags adorn the neighborhoods. And yet, the horrors of the Holocaust have not been forgotten by the German people. Over and over again, I heard Germans talk about their responsibility to remember the past so that they will never again go down that path.”