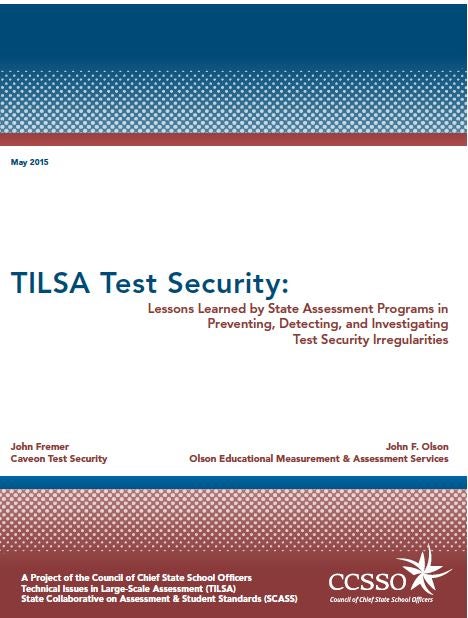 In 2012, the Council of Chief State School Officers’ Technical Issues in Large-Scale Assessment (TILSA) State Collaborative on Assessment and Student Standards (SCASS) launched a special project to assist states in proactively addressing potential security problems. This project culminated in the 2013 CCSSO publication of the TILSA Test Security Guidebook: Preventing, Detecting, and Investigating Test Security Irregularities. The main purpose of the Test Security Guidebook was to provide states with resources for preventing and detecting irregularities, such as cheating and test piracy on state assessments, and for investigating suspected or confirmed instances of improper/unethical testing behavior by students or educators. The Test Security Guidebook also provided details on key technical topics such as data forensics analyses that state staff and others involved in testing will find helpful in their ongoing work.

In response to continued and increasing attention across the country to improving the security of assessment programs, and the needs expressed by many states that more needed to be done to help them improve test security, a follow-up project was initiated by the TILSA SCASS in 2014 to develop a sequel to the 2013 Test Security Guidebook.

This report, titled TILSA Test Security: Lessons Learned by State Assessment Programs in Preventing, Detecting, and Investigating Test Security Irregularities, will be useful to state assessment staff, test vendors, and others who want to learn more about the latest activities and best practices for test security. A primary purpose of the report is to help states improve their existing test security policies, procedures, and protocol, and to implement enhanced approaches for the security of their state assessment programs.

K-2 Assessments: An Update on State Adoption and Implementation