Barbara Soots, WA State OER Program Manager, sees OER as something that can help bring people together, if the process is organized

"We will model policy for instructional materials, and call it out as something that districts may look at,
making clear that quality is first and materials need to meet those quality standards."

Open educational resources (OER) are teaching materials licensed for free use and repurposing. This case study is a part of a research study conducted by CCSSO and iNACOL. The purpose of the study is to explore the current status of development and dissemination of OER in K-12 education at the state, district, and classroom levels. For more case studies and resources, visit http://www.ccsso.org/topics/open-educational-resources.

Background
As the OER manager for the Washington State Office of Public Instruction (OSPI), Barbara Soots has firsthand knowledge of OER on the ground. Since state legislation was passed in 2012 that mandated the creation of a library featuring openly licensed K-12 resources, Soots has been teaming with other state agencies to plan and direct the future of OER in Washington state.

Challenge
"The largest issue that people have with OER in K-12 is the disjointed nature of it," says Soots. "Pieces are granular, and it is incumbent on the teacher to pull together resources to make a coherent whole. That was the concern that was voiced, but that is starting to change."

Soots sees OER as something that can help bring people together, if the process is organized.

"There are key considerations for districts that they need to address at the beginning; the importance of multiple voices at the table to provide expertise on policy, technology capacity, costs, etc."

Solutions
With the goal of making OER resources available to districts throughout the state, Soots and her OSPI colleagues have followed their legislative mandate to "take the lead in identifying and developing a library of openly licensed courseware." This happens through annual reviews by OSPI and state educational leaders.

"We focus on the idea of quality so that when we bring [OER resources] to teachers, we can say that we have looked and referred them - in a Consumer Reports-style guide," Soots says. The Washington State Reviewed OER Library contains full-course curricula and units that have been reviewed with specialized instruments from Student Achievement Partners, and Achieve as well as state-created OER rubrics.

The team at OSPI works closely with districts around the state, helping them to understand the benefits and challenge for OER. Washington State also has an OER grant program, providing OER grants to districts interested in adapting or creating OER.

Soots says that one of the most promising ways to help districts begin working with OER comes in the form of state-led OER summits, which grew out of awareness campaigns and state-sponsored events focused on "OER 101." The current incarnation of OER summits are events that take place on both the east and west sides of the state, and give districts who have expressed interest in using OER the chance to come together for a closer look at OER resources.

Just as important as the interest level is the organizational structure of those teams, Soots says. "We require districts to send a team of people to these events, to cover the areas of administration, curriculum and technology," Soots says. "We have been successful at pulling those people together, and providing portions of the day when everyone is together, and when there are pull out sections [for each team member]."

Utilizing a model of connected learning, with multiple groups of educators working together, means that it is easier for all main groups of stakeholders working to implement OER to gain a shared understanding of basic concepts, as well as considerations specific to each role.

Soots explains some of the concepts that may be addressed at an OER Summit meeting. "We will model policy for instructional materials, and call it out as something that districts may look at," Soots says, "making clear that quality is first and materials need to meet those quality standards."

Soots highlights resources like those from EngageNY that are comprehensive in nature and address articulation in teaching pedagogy, and the K-12 OER Collaborative that provides "a fantastic opportunity to provide the whole package that districts may be used to."

Understanding that the need to individualize education varies between districts and classrooms, Soots says that OER provides educators a chance to make their curriculum planning a more iterative process. She cites Utah, which in 2012 announced that it would begin developing open textbooks in key curriculum areas. "The Utah model gives educators a chance to use a curriculum for a year, then bring teachers together to look at data - what worked [with that curriculum] and what didn't," she says. "This is a huge paradigm shift; we are not talking about a 7-year [textbook] cycle anymore, but an iterative process that builds capacity amongst educators."

Future Steps
Going forward, Soots says that her team is looking to identify new districts across the state that are working to develop their own content. She plans to facilitate connections amongst those teams in all districts and is working on a WA state curriculum that she feels benefits everyone.

"Who can we bring together to collaborate?" Soots asks. "We can share the results openly. The fact that it's OER is a benefit. It doesn't have to be all cookie cutter; [the curriculum] can be a framework." With their work already in motion, Soots and Washington state are poised to bring OER further into the mainstream.

Reviewed OER Library
As a part of the legislative mandate to identify and develop a library of openly licensed courseware aligned with the state learning standards, the Office of Superintendent of Public Instruction in Washington has conducted reviews of OER since 2013. To date, they have evaluated 24 full-course mathematics curricula and 60 units in English Language Arts. The reviews have focused on middle and high school resources and made use of existing review instruments designed to gauge alignment with learning standards. The results from this review are a valuable resource as districts consider their instructional materials options, as well as an important tool for educators and content developers wanting to tap into the most powerful feature of OER - the ability to freely adapt and redistribute materials. (http://digitallearning.k12.wa.us/oer/library) 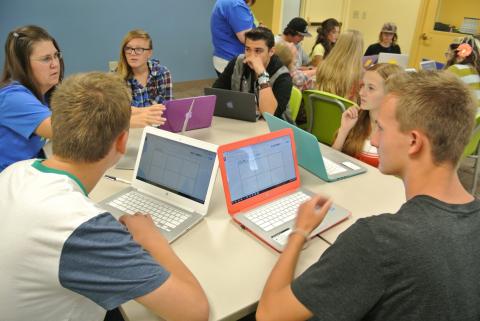 State of the States: Open Educational Resources in K-12 Education