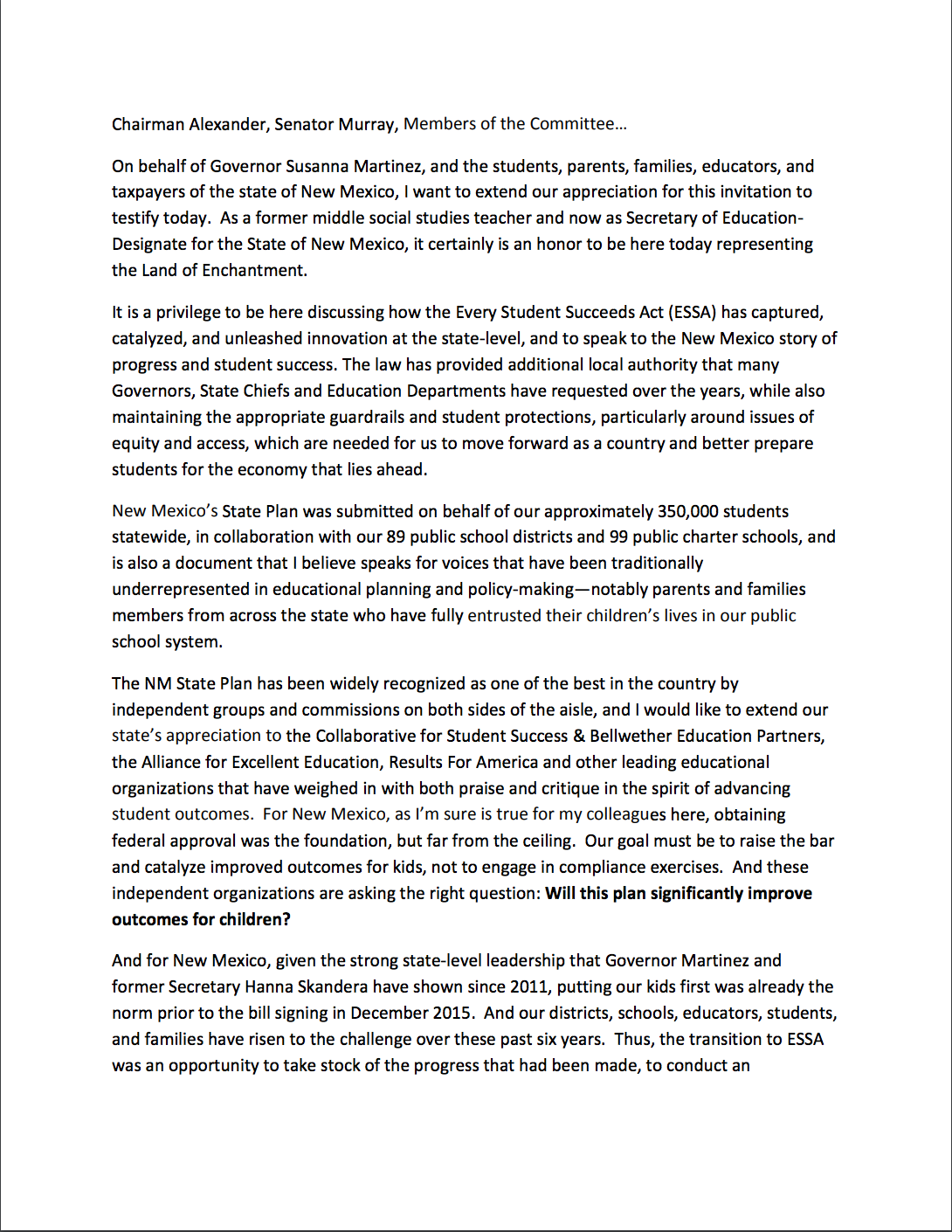 On behalf of Governor Susanna Martinez, and the students, parents, families, educators, and taxpayers of the state of New Mexico, I want to extend our appreciation for this invitation to testify today.  As a former middle social studies teacher and now as Secretary of Education-Designate for the State of New Mexico, it certainly is an honor to be here today representing the Land of Enchantment.

It is a privilege to be here discussing how the Every Student Succeeds Act (ESSA) has captured, catalyzed, and unleashed innovation at the state-level, and to speak to the New Mexico story of progress and student success. The law has provided additional local authority that many Governors, State Chiefs and Education Departments have requested over the years, while also maintaining the appropriate guardrails and student protections, particularly around issues of equity and access, which are needed for us to move forward as a country and better prepare students for the economy that lies ahead.

New Mexico’s State Plan was submitted on behalf of our approximately 350,000 students statewide, in collaboration with our 89 public school districts and 99 public charter schools, and is also a document that I believe speaks for voices that have been traditionally underrepresented in educational planning and policy-making—notably parents and families members from across the state who have fully entrusted their children’s lives in our public school system.

The NM State Plan has been widely recognized as one of the best in the country by independent groups and commissions on both sides of the aisle, and I would like to extend our state’s appreciation to the Collaborative for Student Success & Bellwether Education Partners, the Alliance for Excellent Education, Results For America and other leading educational organizations that have weighed in with both praise and critique in the spirit of advancing student outcomes.  For New Mexico, as I’m sure is true for my colleagues here, obtaining federal approval was the foundation, but far from the ceiling.  Our goal must be to raise the bar and catalyze improved outcomes for kids, not to engage in compliance exercises.  And these independent organizations are asking the right question: Will this plan significantly improve outcomes for children?

And for New Mexico, given the strong state-level leadership that Governor Martinez and former Secretary Hanna Skandera have shown since 2011, putting our kids first was already the norm prior to the bill signing in December 2015.  And our districts, schools, educators, students, and families have risen to the challenge over these past six years.  Thus, the transition to ESSA was an opportunity to take stock of the progress that had been made, to conduct an unprecedented statewide stakeholder engagement tour, one that continues to this day post-plan approval, and to workshop new requirements and opportunities that ESSA presents.

Before I talk about the yearlong statewide listening tour and what it has meant for our policies and programs, let me first note how we grounded the discussions in how our kids are doing in school, how well they are performing, and what our goals are for their future given the demands of the 21st century economy.  In our State Plan, we outline our vision for 2030 and our three big goals for 2020.  And in traveling the state, we asked New Mexicans to keep this vision and goals in mind as they addressed the most pressing topics.

TO ACHIEVE THIS VISION, WE HAVE ESTABLISHED THESE AMBITIOUS GOALS:

With each of these goals, I must note how critical it has been to have state-level executive and legislative leadership that has closed honesty gaps head-on in the years leading up to the passage of ESSA.  We can now look our students, parents, and educators in the eye and know that there is not daylight between what we are telling them about their performance and readiness and what college and career readiness actually requires.  That our assessments measure college readiness in reading and math, that our diplomas not be given out without demonstration of competency, and, ultimately, that we hold ourselves and our schools accountable for year-over-year student academic performance AND long-term student academic readiness and attainment.

In January, New Mexico released an initial response to the three major themes of that report, which included growing initiatives that championing the teaching profession, revising the state’s teacher evaluation system, and reducing time spent on statewide assessments.

I must note just how important it was to have the support of local and national organizations with expertise in different content areas where we were looking to make technical changes to our State plan.  As a member of the Council of Chief State School Officers (CCSSO) and Chiefs for Change, I cannot say enough about the degree to which they helped marshal resources, unlock expertise, and facilitate collaboration amongst states.  I mentioned New Mexico First as our primary state partner, but it was the Learning Alliance in New Mexico that independently gathered stakeholders and key partner organizations such as the University of New Mexico and the Charter School Coalition, and delivered a full report that my team drew heavily upon.

And central to everything was the voice of classroom teachers: Teach Plus New Mexico, for example, submitted one of the most thoughtful set of policy recommendations I’ve seen during my time in both Delaware and New Mexico, 11 policy recommendations in total…EIGHT were incorporated in the NM State Plan, and the others are still being workshopped to this day.  The Public Education Department directly engaged with hundreds of teachers in developing the State Plan, and hosted a Teacher Summit for 1,000 teacher-leaders statewide this summer where the near-final plan was discussed and improved upon.

All of this community input was integrated into the federal framework and the strong state foundation when submitting our first draft to US Department of Education in April.  During the 30-day period prior, we posted a draft of the State Plan and solicited further survey comment.

Following that submission, New Mexico posted and shared a document entitled New Mexico Rising, Together, which captured fifty things we heard thematically during our statewide tour and how we were responding directly to those themes.  This was a watershed moment for New Mexico, and launched the New Mexico Rising, TOGETHER tour—a return tour to seven of NM’s largest communities that took place in April-May of this year.

And since Governor Martinez appointed me to this post this summer, I’ve committed to visiting and recognizing our 121 schools that earned an “A” during the 2016-17 school year, in direct response to feedback from our school boards that we celebrate success and progress and capture and share best practices across district and county lines.  That “NM-True Straight-A Express Tour” is now at its halfway point.  So, in large part catalyzed by ESSA, the team at NM-PED has been traveling and listening and working with stakeholders almost continuously for the past 12-15 months, and we will continue doing so through implementation.

Within the ESSA State Plan, there are scores of compelling opportunities that have surfaced throughout this process, including:

Today, as a result of what ESSA has unleashed, there is broader recognition and understanding that significant progress still needs to be made in education in New Mexico, and that it won’t happen by returning to the ways of the 20th Century.

We have 30,000 more students attending “A” & “B” schools NOW than we did 6 years ago.  More students are taking Advanced Placement (AP) exams, a number that has increased by 90% since 2010, and New Mexico has been a national leader with respect to minority students – particularly Hispanics – choosing to take their education to the next level.  But it’s not enough.

And it’s due to the efforts of so many – from the Governor in Santa Fe to the teacher in the Hatch Valley to the parents and School Board in the northwest corner in Farmington – to fundamentally change our education mindset and actually deliver tangible and measurable results.

But I want to re-iterate that for New Mexico it has been a six-year journey, not a two-year journey.  We’ve moved away from one-size-fits-all, we’ve demonstrated return-on-investment to taxpayers through our targeted investments, we’ve increase instructional time, we’ve expanded Pre-K and Advanced Placement access, and we’ve raised the bar for standards and performance.

To achieve that type of change, ESSA has the power to move the system forward across the nation.  But for New Mexico it is the leadership of the Governor, our Superintendents, our school leaders and our teacher-leaders that have embraced change and gotten results.  The next frontier is scaling that across every district, every school, every day, so that we are able to truly say that in New Mexico, Every Student Succeeds.

In New Mexico, we look to a new idea for our state we ask one simple question…”Will this help our students?” That simple focus continues to focus all of us on our mutual goal. It’s been suggested by a few that some of our students don’t bring skills and assets to our schools, perhaps meaning that all this work, and the tireless effort from our educators won’t make a difference.  In New Mexico we have rejected that premise—and it’s an honor to work alongside people in New Mexico who believe that every child can learn at the highest-levels, and are doing what it takes to make that a reality.

Our students and families believe in their limitless potential…and so do we.  We will depend on them to ensure the safety, the security and the prosperity of New Mexico and of the United States. They are in school right now, but the day is fast approaching when their skills will be called upon to build the future.

That is why now is the time to act and to not slow down.  ESSA has certainly emboldened that urgency and unleashed further innovation in New Mexico—and set the table for states to take courageous action.  It’s an honor to be here representing the state.

Thank you again Chairman Alexander, Senator Murray, & Members of the Committee, I look forward to your questions.